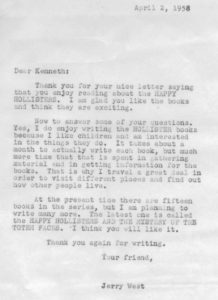 Do you think you could write an entire book in a single month? Happy Hollisters author Andrew Svenson did—and that’s exactly what thousands of writers around the world will be doing when National Novel Writing Month kicks off on November 1st.

What is National Novel Writing Month?

National Novel Writing Month, which is often abbreviated as NaNoWriMo or simply NaNo, is a not-for-profit organization that encourages writers to pick up the pen, fire up the laptop, and start writing. The event takes place every November, challenging writers to focus on a single fiction project and write 50,000 words by the end of the month. Established and aspiring writers alike participate in the annual challenge, and participants are free to work on any kind of creative project, whether it’s a sprawling fantasy, a gritty true crime thriller, or a whimsical children’s book.

Many published novels, especially those for young adult and adult audiences, tend to be longer than 50,000 words. For example, The Hobbit is 95,356 words long, while Gone With the Wind is a whopping 418,053. Some genres, like high fantasy, amass heftier word counts (the first book in the Game of Thrones series is 298,000 words!) and the word count often depends on the target audience. A chapter book for an emergent reader and an adult science-fiction epic will be of vastly different lengths to accommodate differences in readers’ attention spans.

Since many novels are typically longer than 50,000 words, many NaNoWriMo participants continue adding to their word count after the challenge is over. While some writers do finish entire novels in November, many others use the challenge as inspiration to simply get started on a project that they’ll continue to work on once NaNoWriMo is over.

The average book in The Happy Hollisters series is 33,000 words long—long enough to pack in plenty of excitement and mystery, but short enough to hold the attention of a young or reluctant reader. If NaNo had been a thing back in 1953, author Andrew Svenson would have had no problem cranking out a new Happy Hollisters mystery story in 30 days!

Svenson, who wrote The Happy Hollisters series under the pseudonym Jerry West, never participated in NaNoWriMo, which first started in 1999. But as the author of more than eighty beloved children’s books, he had a very effective writing process for writing books quickly and said it usually took him about a month after his research was completed. He began by creating a detailed outline, or a summary of a major plot points. This allowed him to map out the plot from beginning to end before he even sat down at his typewriter, which helped him avoid that dreaded “writer’s block” and allowed him to concentrate on the plot twists, clues, and cliffhangers that his young readers still love today.

For writers accepting the NaNoWriMo challenge, an outline is a great place to start. Some writers prefer a long, detailed outline that covers all main plot points and subplots, while others might start with major “beats” or plot elements, then tie them together as they write. Either way, an outline allows writers to focus on the words, rather than dwelling on what should happen next.

Are You Up to the NaNoWriMo Challenge?

Maybe you could write a Happy Hollisters book or a children’s mystery in the same vein. If you’re one of the many readers who was inspired by The Happy Hollisters series, why not follow in Svenson’s footsteps and try writing your own book during National Novel Writing Month? Please let us know if you do—we’d love to hear about the exciting stories you’re bringing to the world.